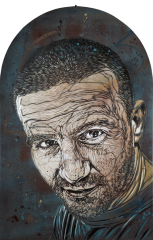 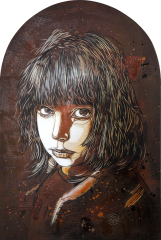 “C215’s art captures a light, depth, and humanity that is difficult, and rare using stencils, his chosen medium. Stencils tend to flatten images and make them static, but C215 has developed a style of illustrating and stenciling that yields an impressionistic illumination of his subject’s character. Even though his technique is meticulously refined, C215’s work transcends the formal and seems to get to the core of compassion and belief in the human spirit. Encountering C215’s pieces on the street is always makes me happy”

“When one critiques the work of an artist as insanely talented as C215, you risk falling into a trap of focusing more on the artists’ technique than on the content. We could easily write about how intricate and skillful his hand-cut stencils are. Or how the depth of his layering puts him in a class of his own.

Because for us, focusing on C215’s technique is too “easy.” It would only diminish the true importance and resonance of his body of work.

We first met C215 in 2008, in a small cafe outside the Pompidou Center in Paris. It was only a few minutes into the conversation that C215 began to talk about his deep love and devotion for his young daughter who at the time, because of a separation with the child’s mother, he was seeing less often than he desired. It suddenly made sense to us that that the beautiful young girl depicted in many of C215’s stencils was indeed his own child. It also became clear that the act of putting her portrait up around the world was something that had a deep emotional meaning for him, not only as an artist, but as a father.

As we learned more about C215’s life, it became immediately clear to us that his work was much more than just a series of stenciled portraits placed on city streets. It is the deep empathy that he has for his subjects, that gives C215’s work a profound emotional resonance. Through his work, C215 brings to the surface the emotions and feelings one has of being alone in the city with no place to go. He views his street portraits as orphans that are being left behind not only by him as an artist, but by society in general. In the process of creating the work, C215 is able to personally connect with all the absent people in his life – especially his own daughter.

Artists like C215 are a rare breed. But they are also at the heart of what makes “street art” so meaningful and important. As you learn more about the artist, you discover that the artwork is of secondary importance to the story and the emotional connection behind the work.

C215 work gives dignity and respect to the souls he encounters around the world, while he continues to search for his own.”

“C215 is a master stencil artist who creates powerful portraits with delicately hand cut lines. We first met on a super-secret mission in a Paris subway tunnel where I watched him spray a large stencil under the most trying conditions. Wanting to see more, I asked to visit him in Vitry, a community on the outskirts of Paris where he lives and works. I was in for an incredible tour.
Vitry-sur-Seine has a long history as a center for arts and culture and C215 realized that he lived in a community that might be receptive to street art. Seeing every electrical box, rusted doorway, telephone enclosure, mailbox and peeling wall as a potential canvas, he turned the town into a model art district eventually even getting support from the city council. A walk through Vitry is a treasure hunt with haunting portraits peering out from unexpected places. C215 has also invited artists from all over the world to come and paint, thus turning Vitry into an international street art destination.
Although C215 often portrays disadvantaged people, they are always depicted with dignity as survivors of their difficult circumstances. As a street photographer, I closely identified with this point of view as I felt my own work came from a similar sensibility. But perhaps that is the beauty of C215’s art. It is deeply personal yet universal. He is a community artist extraordinaire, an advocate for street art who lets his art do the talking.”

“In the fall of 2007, I came across a painting of a group of riot cops in a defensive stance by an artist named C215. I’d seen plenty of artwork created with stencils, but this one was different. The stencil was a series of long, overlapping, flowing lines that twisted and curved forming the faces, bodies, and shields of the riot cops. Up close the lines had their own life, but from a distance they visually merged into a coherent image. There was an organic fluidity to the piece that contradicted the gritty reality of the subject. Little did I know that seeing that piece would mark the beginning of one of my most solid and inspiring friendships to date.
About a year later, C215, aka Christian Guémy, and I met in person for the first time and talked about art, stencils and life in general. He brought a folder full of his work to share with me. Each stencil was sprayed on an old, French book page. The soft yellowing of the paper was the perfect backdrop to the black and white spray paint. The contemporary medium of spray paint was juxtaposed with the classical subjects of his pieces. I flipped through them knowing this wasn’t just about images; it was a glimpse inside his head. I was seeing the images, objects, thoughts, ideas, and people he thought deserved further investigation. As I flipped through, one face continued to surface: the image of a small girl who appeared to be around 5 years old. “Who is that?” I asked. Christian told me it was his daughter. I asked if she liked being painted, to which he replied, “Yes, but I cut a stencil every week of her so that she knows I do not forget about her”. He explained that she lived with her mother so he did not see her as often as he’d like. He would cut and spray the stencil of her around the city, in conspicuous places, so that she would see the works and know that he was thinking about her even though she was not with him. You could tell by the attention to detail he cared deeply. His heart was on display each time he left his mark. He was a man who was quiet with words, but shouted with images. All that could be told would be found on the cities walls after his visit. It’s rare to find someone who is able to align their hands to illustrate the emotion that their heart produces, yet Christian was able to do it better than anyone else. He was a classical artist.The concept of what an artist is has changed over the decades. The idea of an artist as a creator has been bastardized and morphed into an amalgamation of marketing savvy, slick talking, and social networking rewards. Talent has taken a backseat to explanations and connections. It has become an easily digested iconography that is void of context or purpose. But Christian is a stalwart craftsman, an old soul in a young man’s body. Like a sculptor’s chisel, his scalpel does not capture reality, but gives birth to it. I’ve watched the line quality of his pieces from the beginning. I’ve seen the poetic cadence of his blade slicing the paper until an image emerges. The sinewy black and white twists playing with each other as paint is sprayed through the stencil. Up close, the lines could easily be mistaken for a diagram of the circulatory system, an illustration of muscle fibers, or a jumble of nerves. They have a life of their own, both in subject and technique. I’ve always subscribed to the notion that if it doesn’t make you feel something, it’s not art. Christian’s work has always made me feel like I am looking at one frame of thousands from a movie that is being played. I find myself looking and wondering who is the subject, where are they now, what happened before the image was captured, what do they sound like… Over the past decade, I have followed Christian’s travels to India, Brazil, Greece, Turkey, Norway, Switzerland and dozens of other countries. With each stop, he has blanketed the city with his work. Not with gauche murals, or primary colored paintings, but with dozens – sometimes hundreds – of small, quiet, stencils that are tucked away in the dark corners and hidden recesses of the city just like the homeless subjects of many of his paintings. This approach of sharing his work in foreign lands seems at times to be just as much a compulsion as dedication. With the fame hungry crop of artists these days, it’s impressive to see one who has the motivation to do something simply because it fulfills him and not because he will receive praise from the online community. Regardless of whether it’s painting on the shoeshine boxes in India or working with the homeless kids in the favelas of Brazil, there is a clear desire to interact world around him. To put reminders of forgotten people, forgotten places, forgotten emotions, on display for those willing to take the time to stop and look. With his travels taking him so far away, it’s reasonable to ask if the same self-discovery is reflected internally.

When I first met Christian, his work was black and white, with an occasional grey, brown, or yellow thrown in. Although dramatic and beautiful, it was also stark. His vision was limited to the most basic of hues, with little color in between. In recent years, his work has evolved as he has himself. Christian’s travels have lessened while the paintings have started to incorporate more color. His visual lexicon has grown. The riot cops and homeless people who dominated the early paintings have grown to include portraits of those who are content or contemplative. Colorful lines and splashes of color weave behind the reflective gaze of a woman looking away. It is this evolution in subject matter that is the Rosetta stone of his future. The physical journey has turned inward. The work that any artist makes cannot be authentic unless they are personally invested with the subjects being painted. Christian has continued to observe the world around him, digest it, and incorporate it into his perspective. City walls display the hieroglyphs of his life; all the love, pain, troubles, and celebrations are there for all to see. Just as memories fade, so does the artwork that he has left. The lifespan of street art is short. Images appear over night on doorways and walls, only to be buffed or scribbled out the next day. The pieces that do remain slowly fade under the punishment of the sun or get washed away as paint peels. It is for this reason that the documentation – the book that you hold – is so important. Art is not unlike a person. It wants to be remembered. To be appreciated. To be seen for what it is – a reminder of someone, something, or some place special.”

This is the default gallery type template, located in:
/home/starkart/public_html/wp-content/plugins/nextgen-gallery/products/photocrati_nextgen/modules/nextgen_gallery_display/templates/index.php.

If you're seeing this, it's because the gallery type you selected has not provided a template of it's own.